We were in the middle of Das Land des Lächelns (The Land of Smiles), a Viennese operetta by Franz Lehár about the cultural hurdles inherent in an inter-racial marriage between a Chinese man and a Viennese woman.

In full Chinese garb complete with Fu Manchu mustaches, we (the opera chorus) were attendees at the wedding. The center of the stage was taken up by a huge Chinese gong, which our colleague was to strike at the height of the ceremony.

As he drew back his mallet to strike – even the orchestra had paused for the event – the large round head of the mallet fell off, and with all eyes in the theater on the felt-covered orb, rolled to the edge of the orchestra pit, finally dropping into the pit with a resounding “THUNK”!

The audience erupted with roaring laugher, and it was all we could do to stay in character – as it was, our glued-on Fu Manchu mustaches lost their footing and drooped off our faces.

With perfect timing, our colleague waited for the laughter to die down before finishing his task to strike the gong . . .  and instead of the rewarding deep peal of the gong, the result was a weak “ting”, which brought another wave of laughter from the audience.

I once sang with the great Spanish tenor Placido Domingo, a memorable experience!

The Bern theater where I worked for 23 years often engaged special soloists for gala performances, and they hired Domingo in 1982 to sing the lead (Canio) in Leoncavallo’s Pagliacci, in which the jealous clown murders his wife and lover at the end of the opera.

I had a small role as one of the villagers who boisterously greet Canio’s traveling comedy stage troupe as they arrive in town.  When Canio tells colleague Tonio to go with his wife Nedda to bed down the mules, one of the villagers (me) teases Canio that Tonio is planning an affair with Nedda.  Canio is not amused, and jealously warns that while he plays the buffoon in the evening’s play, he will not tolerate other men making advances toward Nedda.

This last part Domingo sang after violently grabbing my shirt collar and singing directly in my face -- honestly, I had never heard such power in a voice so close . . . my teeth were vibrating inside my mouth!

I still have that shirt today, 40 years later!

In real life, Domingo was very nice that evening, very professional and yet kind and respectful to all of us, and I will always cherish that memory with the great tenor. 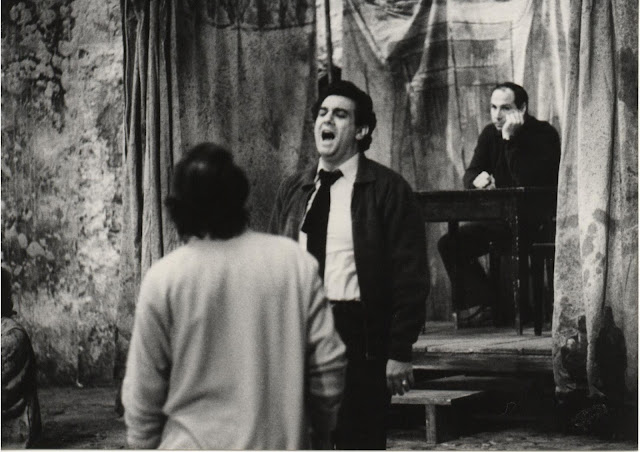 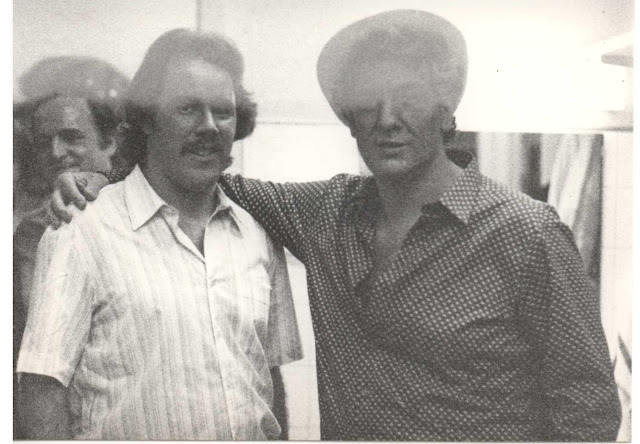 In late 1972, I was a budding tenor at Iowa State University in Ames, and I had heard that the Italian tenor Luciano Pavarotti was on tour, and was going to sing a recital at a concert hall in Minneapolis.  The guy had just wowed Metropolitan Opera patrons that February with an electric performance of the Daughter of the Regiment tenor aria (the one with nine high Cs), so my singing professor highly recommended that I go to Minneapolis to hear him.

I bravely made the 3.5-hour trip in snowy Iowa weather for the evening concert.  I could only afford a seat at the back of the auditorium, so I took along my field glasses to be able to see him better.  The case was rather large, but in the end, I was glad I’d taken them along.  The concert was fantastic, the tenor had an immensely beautiful and exciting voice!

Imagine my joy when at the end of the concert, people were invited to meet Mr. Pavarotti backstage!  So I stood in line for quite a while with a program I wanted him to autograph.  When I got up to him, he smiled and shook my hand, looking briefly at the large case I was carrying.  Then he said something to me that I did not understand – I vaguely nodded and said “yes.”  Then he said what I DID understand: “Oh, I’d like to hear that sometime.”  I nodded again vaguely, and the organizers then moved me away.

I was shocked!!  He’d mistaken my binocular case for a recorder!  And I stupidly basically admitted that I’d [illegally] recorded his performance!!!  My 3.5-hour drive back to college in the snow was a head-shaking letdown!

Fortunately, nothing ever came of the incident, and in hindsight, I wish I HAD recorded the concert!  So even though I felt like an idiot after that conversation, it was a memorable occasion, one I obviously have not forgotten to this day.

As to what I thought (and still think) of Luciano Pavarotti, I have never heard a more exciting, electric tenor voice in all my years of singing and listening to opera.  His gracious personality coupled with that tremendous voice has done so much to make the art form popular; I salute him!